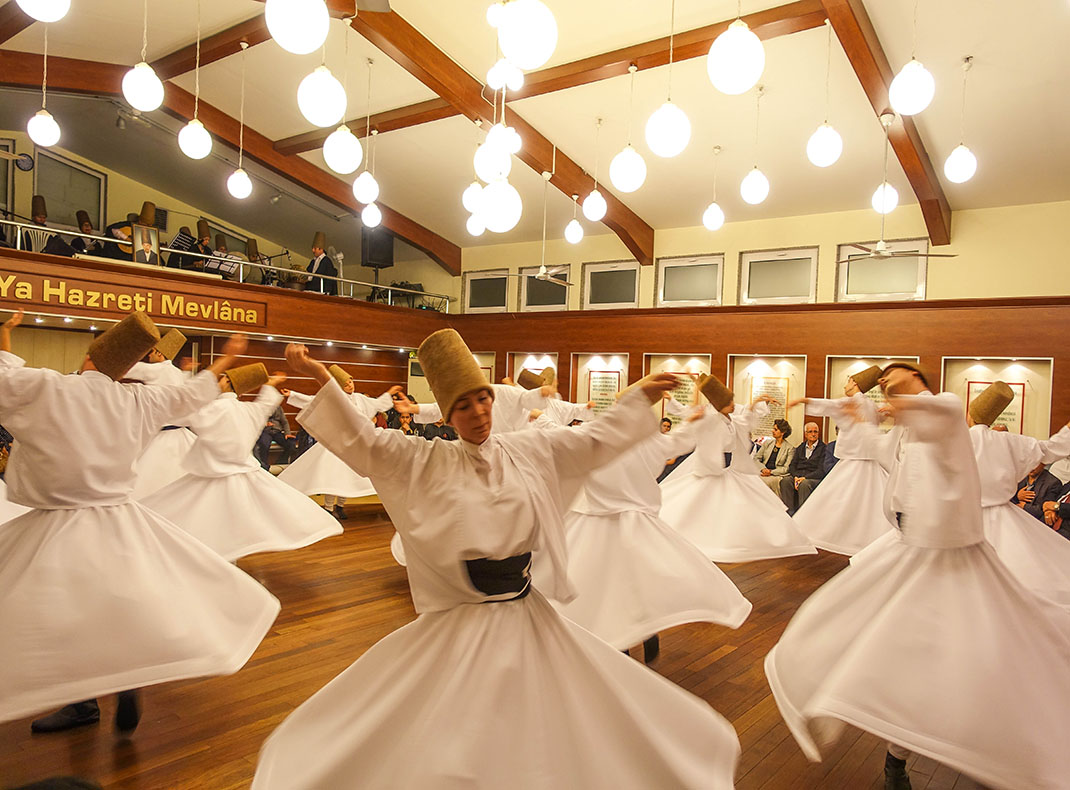 While living in Istanbul, we felt that there were certain things that must be experienced.

What visit to Turkey would be complete without a firsthand sampling of Turkish coffee, Turkish delight, Turkish baths, and the Whirling Dervish. So, s through Google for a way to see the Whirling Dervish we discovered a woman’s story that told of a more authentic experience. It was a real ceremony as opposed to the more Whirling Dervish dance shows with the lasers and lights. Those shows look entertaining enough, but we wanted something different. We wanted something authentic and performed traditionally by locals.

Joining up with a small group of similarly curious people, we headed to the old walls that where Constantinople was born.

Arriving at the old gates filled us with awe and the group got quiet as we passed through. After many name changes and thousands of years of history later, the ancient city walls still stand. Every inch of the space inside the walls filled and stacked with homes. It’s also the location of the Silivrikapi Monastery where we witnessed a traditional Whirling Dervish ceremony.

Gathering by the entrance, we watched the attendees and followed their lead.

Leaving our shoes on a rack by the front door, we were escorted to a front corner of the room. It was from here that observers could get the full experience, but without interrupting the interactions of the gathering. The night started with everyone seated together casually around the elders. Locals would ask questions to the elders and they would respond. It was an incredibly heart-warming display of community. This was a true gathering of families that respected and learned from their elders. Life lessons, knowledge from first-hand experiences, and ideas that couldn’t be learned in a classroom. So, we watched as years of experience and knowledge were passed on to the younger generations.

After discussing many topics, they prayed together for a while.

Musicians played an accompanying melody to the prayer and a lone man stood to perform the whirling dance that we had come to see. We never found out if this was a normal part of the ceremony or if it was because he was taken by the moment.

There was a short break while refreshments were served and the floor was cleared. This allowed time for the band and semazens (whirlers) to prepare for the rest of the ceremony. The dance itself is called the sema and has been around since the 13th century. The belief is that the semazens can enter into a through the sema in order to become closer to Allah. Historically it was only performed by men but the Mevlevi Church we visited had a more enlightened view.

We were told a story of a group of bold women that, against tradition, had asked the head elder for permission to dance the ema.

The elder said he would consider it if they proved their skill with a test and show of their proficiency. It was said that he was very impressed with their performance and from that point on the women of that church were allowed to dance the sema alongside the men.

We felt truly honored for the chance to witness this ceremony.

It felt like stepping back in time to a simpler way of life. Back when communities were structured on generational wisdom being passed down. It was the most respectful gathering and exchange of ideas that we’ve ever witnessed. Because of this, a close bond could be felt from the youngest child to the oldest elder. Even as observers from outside of the community, we were made to feel welcome. So, we will always be grateful to have been given the chance to witness and be a part of something centuries old. It was exactly the kind of experience we hope for as travelers because we truly believe that travel can expand your view of the world.

Tip: During this Monastery visit & Dervish Ceremony you will see the story of Sufism, Sufis, and their communities in Istanbul. You will meet the Sufi community and see their monastery. You’ll get to listen to their music, and witness the Whirling Dervishes Ceremony. The ceremonies are presented every Monday and Thursday.